The faulty logic of the ISIS
Preface: Religion is the last resort of the scoundrel…as the saying goes…refers to the tendency of some unscrupulous people to twist religion to justify their own nefarious activity. Genghis Khan famously gave a “sermon” in Bukhara after sacking the city saying that Allah had sent him as a punishment for the people because of their evil deeds. Self serving religious leaders of all hues have used religion to fire up their mentally and morally challenged followers to commit mayhem in the name of their God.

But the One and only God, Allah says different:

O you who believe! be maintainers of justice, bearers of witness for Allah’s sake, though it may be against your own selves or (your) parents or near relatives; if he be rich or poor, Allah is nearer to them both in compassion; therefore do not follow (your) low desires, lest you deviate; and if you swerve or turn aside, then surely Allah is aware of what you do.

For this reason did We prescribe to the children of Israel that whoever slays a soul, unless it be for manslaughter or for mischief in the land, it is as though he slew all men; and whoever keeps it alive, it is as though he kept alive all men; and certainly Our Messengers came to them with clear arguments, but even after that many of them certainly act extravagantly in the land.

He (S) also said: At-Tariq ibn Shihab reported: A man asked the Messenger of Allah, peace and blessings be upon him, as he put his foot in the stirrup, “What is the most virtuous struggle (jihad)?” The Prophet said, “A word of truth in front of a tyrannical ruler.”
(Musnad Ahmad)

That’s what this book is: Truth before the tyrant. The tyrants who sell weapons of mass destruction to other tyrants and facilitate murder of innocents. And those tyrants who murder innocents especially in the name of Islam and claim that Islam authorizes them to do so. This is evidence that Islam doesn’t authorize them,  rejects their actions, condemns them and warns them of the punishment of Allah in this world and the next.

This book is also a plea to good, decent people everywhere of all nationalities and faiths to stand together against evil, shoulder to shoulder and not to succumb to the propaganda of both kinds of tyrants and join ranks to fight them.

In the words of Martin Luther King Jr:


I believe this is such a position.

Why this blog? Because…

In the End we won’t remember the words of our enemies but the silence of our friends. ~ Martin Luther King Jr.


I will not be silent because my conscience does not allow me to be. 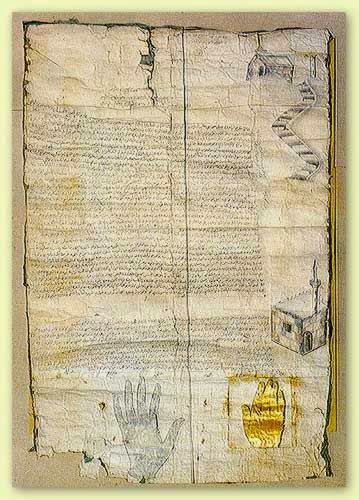 “This is a message from Muhammad ibn Abdullah, as a covenant to those who adopt Christianity, near and far; We are with them. Verily I, the servants, the helpers, and my followers defend them, because Christians are my citizens; and by Allah! I hold out against anything that displeases them. No compulsion is to be on them. Neither are their judges to be removed from their jobs nor their monks from their monasteries. No one is to destroy a house of their religion, to damage it, or to carry anything from it to the Muslims’ houses. Should anyone take any of these, he would spoil God’s covenant and disobey His Prophet. Verily, they are my allies and have my secure charter against all that they hate. No one is to force them to travel or to oblige them to fight. The Muslims are to fight for them. If a female Christian is married to a Muslim, it is not to take place without her approval. She is not to be prevented from visiting her church to pray. Their churches are to be respected. They are neither to be prevented from repairing them nor the sacredness of their covenants violated. No one of the nation (Muslims) is to disobey the covenant till the Last Day (end of the world).”
English translation from ‘Muslim History: 570 – 1950 C.E.’ by Dr. A. Zahoor and Dr. Z. Haq, ZMD Corporation. P.O. Box 8231 – Gaithersburg, MD 20898-8231 – Copyright Akram Zahoor 2000. P. 167.
The original letter was taken away in 1517 by the Turkish Sultan Selim I and is now in the Topkapi Museum in Instanbul, but the sultan gave the monks a copy of it and sanctioned its terms.
For more information http://www.cyberistan.org/islamic/quote2.html
An image of the original letter on the official website of the monastery
http://st-katherine.net/en/?s=covenant+of+muhammad+the+prophet&submit=Go
The official website of St. Katherine Monastery is below:
http://st-katherine.net/en/index.php?option=com_content&task=view&id=20&Itemid=65
I quote from one of the most important books on the subject of Muslim history: Lost Islamic History by Firas al-Khateeb an Islamic History teacher at Universal School in Bridgeview, Illinois. http://lostislamichistory.com/jerusalem-and-umar-ibn-al-khattab/
By 637, Muslim armies began to appear in the vicinity of Jerusalem. In charge of Jerusalem was Patriarch Sophronius, a representative of the Byzantine government, as well as a leader in the Christian Church. Although numerous Muslim armies under the command of Khalid ibn al-Walid (R) and Amr ibn al-‘As (R) began to surround the city, Sophronius refused to surrender the city unless Umar (R) came to accept the surrender himself.
Having heard of such a condition, Umar ibn al-Khattab (R) left Madinah, travelling alone with one mount and one servant. When he arrived in Jerusalem, he was greeted by Sophronius, who undoubtedly must have been amazed that the caliph of the Muslims, one of the most powerful people in the world at that time, was dressed in no more than simple robes and was indistinguishable from his servant.

Umar (R) was given a tour of the city, including the Church of the Holy Sepulchre. When the time for prayer came, Sophronius invited Umar (R) to pray inside the Church, but Umar (R) refused. He told Patriarch Sophronius that if he prayed there, later Muslims may use it as an excuse to convert it into a mosque – thereby depriving Christendom of one of its holiest sites. Instead, Umar (R) prayed outside the Church, where a mosque (called Masjid Umar – the Mosque of Umar) was later built.

The Treaty of Umar