Skip to content
Forget sacrifice, think investment
All sacrifice ends, but investment yields forever
Invest in yourself, in your learning. Knowledge is the key to success. But only if applied.
Knowledge applied thoughtfully yields wisdom. The two are not the same. So focus on your investment; track it, measure the yield, and do it often. Write your own Learning Appraisal every quarter. Every week is even better.
Ask yourself, ‘What did I learn in the last period and how can I apply it?’ Remember that all learning is for the sake of application.
The one who wins the bout is not the one who knows about Judo but the one who knows Judo. The two are not the same. 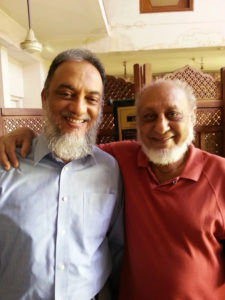 My mentor who taught me Judo and self-defence among many other life lessons
– Nawab Nazir Yar Jung
There’s a wonderful story about a Judo master and his student. The student was a young boy and very dedicated. But one day he had an accident and lost his right arm. After he recovered he went to see his master. The master told him to return to the dojo and resume training. The student was surprised but did as he was told.
The master taught him one throw and told him to practice it. The boy practiced that throw over and over and over. Weeks and months passed. Three years passed. Every time the boy asked the master if he wouldn’t teach him something else, the master refused and told the boy to keep practicing the same throw.
Then one day there was an International Judo competition with champions from all over the world. The master took the boy to the competition and entered him in it. The boy won the first match easily as it was with someone his own size. The master then entered him in the next higher weight. The organizers wondered at the wisdom of this. But to everyone’s surprise, the boy won that match also.
The master then entered the boy in the final, heavy weight competition. The organizers protested. They said, ‘The champion will kill the boy. The boy has only one arm. He is handicapped.’ The master smiled and said, ‘I take responsibility. Enter him in the match.’ Very reluctantly they did. The match was announced. The competitors came into the ring. You could hear the crowd draw in a breath of astonishment. There was total silence. The champion attacked. The boy retaliated and the champion fell flat on his back. There was total pandemonium in the arena. The referee declared the boy, World Champion.
As the master and his student returned home, the boy asked his master, ‘Master, please tell me did this happen? How did I beat the world champion? I have only one arm. I have no right arm. How did I defeat every competitor? How is this possible?’
The master replied, ‘Very simple. The throw that I taught you and insisted that you practice all these years has only one counter. That is to grab your right arm. And you have no right arm. So, nobody can beat you as long as you live.’
That is the meaning of learning, of wisdom, of investment. That is the meaning of applying knowledge. Knowledge unapplied is worm-food; it sits in books and worms eat it. So learn and apply. Add to the learning. Change what you learned. Customize it to suit your situation.
To begin with, ask yourself, ‘What do I know?’ Then write down all that you know.
Then ask, ‘What do I need to know?’
That will guide you to seeking the knowledge that you need to succeed.
Then look for places to apply it. Actually look to see who you can help with what you know. Cherish such people, appreciate them, become the floor on which they walk. The wise understand that knowledge is what comes after someone has lived it. And that can only be transmitted from person to person.
Learning – real learning – is not a virtual experience.
Sadly, we live in a world today that can’t differentiate between technicians and scholars. Between scholars and practitioners. For in the end it is only the practitioner that can teach you how to practice. So seek a mentor. It is for you. Not for him. It is for you, if you value your life. It’s your call.
Not only will you find places to apply your knowledge, but it will also open doors for you in places you would not have imagined.
That is the state of grace that comes from investment.
0 0 vote
Article Rating

Beautifully narrated on how the trust, respect and practice together lead the trainer and trainee towards a successful learning. Thank you sir for the story which has less words and more work!

Amazing story of the Judo Master. We hardly find a Master in today's times, who would teach such lessons "To be Unbeatable". But, I am glad that I have one, and that is Shaikh Yawar Baig.

That is why the guru shishya parampara is so successful.
Well said yawar. You have scored again like the
One arm judoka.

I always remember this Quote of you when I think of Sacrifice: "The only Sacrifice is that Tandoori Chicken who died for you" 😀 😀