Negative people look for things to complain about and find them.
Positive people look for things to be grateful for and find them. Make your choice
I’m sure you’ve heard this before that every day we wake up, we have a choice. We can choose to see the day as positive or negative. And guess what, the way we choose is the way it turns out.
This is not magic.
The reality is that the way we expect the day to be drives our own behavior and that produces the positive results for us. 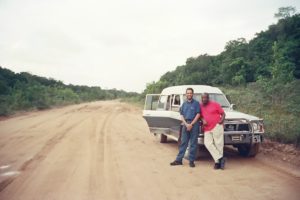 I had a friend who was my mentor and continues to be an inspiration every time I feel that life is tough. He was my manager, my first manager when I lived in Guyana in 1979; my boss, my friend and as I mentioned, my mentor. In Guyana, he was the BOSS. He ran the whole Kwakwani Mining Operation and I was his assistant. New, foreigner, wet-behind-the-ears, first job, zero experience. Yet in the five years that I worked for him, he made me a man. He took what I came with – the training and upbringing of my parents, the mentoring of Aunty Mohini and Uncle Rama, of Nawab Nazir Yar Jung and Nawab Habib Jung and K. Kuruvila Jacob and my teachers in school and life – and gave it a finish. Learning is never finished but it goes through stages. One of the major thresholds that I crossed was when I worked with Mr. James Nicholas (Nick) Adams. I have written about these years in my book, ‘It’s my Life’, so if you are interested, please read it there. I left Guyana in 1983. 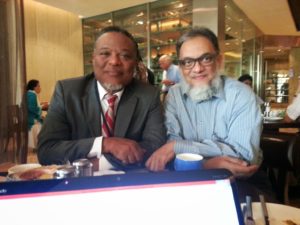 I returned to Guyana in 1997 when I was invited by the Prime Minister, Mr. Samuel Hinds, who was an old friend from my days there when all of us worked in the same company. My dear friend Arjun Reddy and I spent a very pleasant week in Guyana as guests of the Prime Minister. God bless Sam and Yvonne’s hospitality. Nick by then had retired to Linden and we spent some lovely days together. Nick told me that he was planning to migrate to the US as his family was there. I didn’t think that was a great idea because he had his own house in Linden and had a very nice and comfortable life. But life has its decision points and only those who live it can make those decisions.
I next met Nick in 2009 when I was in New York and discovered that he had a job as a doorman in an apartment building in Brooklyn, New York. I almost wept, until I saw the big smile on his face and he said to me, ‘You know Yawar, I am so fortunate. I sit in a cool air-conditioned lobby all summer when New York is sweltering and in a nice heated lobby when it is freezing. I get paid just to be here. I am so grateful to God for this because at my age I still need to work and if this job wasn’t there, what would I do?’ I took a deep breath and said to myself, ‘Boss, this is about you. Not him. This is Allahﷻ telling you something. Nick is the means by which this message is coming to you.’ In the course of conversation, he said to me, ‘There is an old Jewish lady who lives in a small but very nice flat on the top of this building. She lives alone. Every once in a while, especially in winter, she calls me and requests me to get her a sandwich from across the street. She is old and it is difficult for her to wrap herself up and go across the freezing and often slippery street, so she asks me. I always do this for her. My colleagues, other doormen, object. They tell me that I must not do it as it is not part of my job description. How to get the sandwich is her problem, not mine. But I don’t listen to them. I just do it because that is the right thing to do.’
I am listening to him and saying to myself, ‘This is what he taught me all his life – that life is a bank account. Deposit into it when you don’t need it and you will have it when you need it.’ Here was a man who radiated positivity in situations where others would have given up and curled up, ready to die. At the age of seventy-five, he lost his job due to cancer and had hip replacement surgery and so couldn’t work any longer. His lovely wife Kathleen was working but they needed a home. Then the old lady in the apartment died. A couple of days later, her son comes to Nick and says, ‘My mother wrote in her will that you should live in her apartment as long as you live. I have come to inform you and to make a request.’ Nick says to me (on the phone, when I called him as I did from time to time), ‘I was overwhelmed with thankfulness for what God did for me. I needed a house and He gave me an apartment in Brooklyn in one of the best apartments, rent free for life. So what was the man’s request. The man says to me, ‘My mother had her furniture. I don’t know what to do with it. I don’t need it and to store it would be prohibitively expensive. So, can I please leave it in the flat and you are most welcome to use it?’ Nick says, ‘Every time you think God gave you something and are grateful, He gives you more. I needed a home. He gives me a furnished home, free for life.’
I am saying to myself, ‘Here is a man who is living the Ayaat of the Qur’an where Allahﷻ said exactly the same thing – if you are grateful to me I will enhance my blessing.’ Nick’s cancer continued and towards the latter part of his life it became very painful so he was mostly sedated. But on the occasions when I could talk to him and asked him how he was feeling, he always replied, ‘I am very well. I can’t thank god enough for what He has done for me.’ I thought to myself, ‘Here is a man who has the option to think of so many negative things that have happened in his life, but he chooses to think of the positives things and is grateful for them and not a negative or ungrateful word from him.’
Allahﷻ appreciates those who appreciate His blessings and refuse to complain about the trials that are also part of life. I saw that in the life of Nick Adams. Two weeks before he passed away, he accepted Islam and died a Muslim. His memory illuminates my own life, especially when things are difficult. And his mention and story do the same to many others all over the world. May Allahﷻ who gave him Islam, give him Jannah.