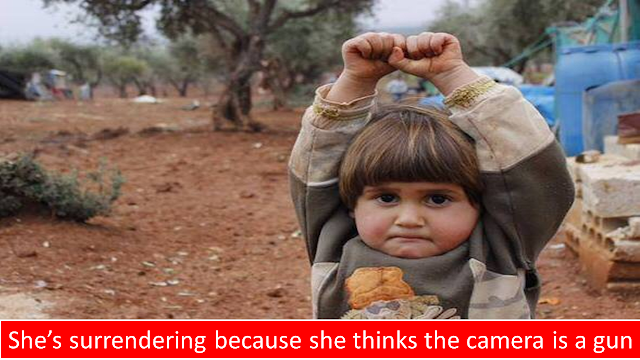 This is truly one of the saddest pictures that I have ever seen. You can see how she is holding back her tears. What have we adults done to our children?
I defend Islam. Not those who call themselves Muslim but go against Islam.
ISIS is a political problem. Not a religious one.
So trying to explain ISIS and its actions through the Qur’an and Sunnah – the theological basis of Islam is futile and misleading. ISIS is a narrative started by those who created ISIS and to answer them is to play into their hands.
It is like someone who asks, ‘Have you stopped beating your wife?’ You can’t answer that question in the normal way by saying yes or no. You are damned if you say yes and you are damned if you say no. The only way to answer that question is to say, ‘I never beat my wife.’ Or even better, say, ‘I am not married.’
This is the raising of a voice in the hope that I will be joined by other voices – not only Muslim voices – but Christian, Jewish, Hindu, Sikh, Atheist, Anyone voices – of people who believe in compassion, morality, ethical behavior, justice and accountability. People who live by principles that reflect integrity and honesty and a sense of responsibility for our lives and actions. People who are not racist and who don’t put a differential value on the lives of other people; who consider murder to be equally heinous no matter who is killed. People of courage who are not afraid to stand for justice, especially when they stand alone. People who don’t do it because they think it will change the world. But who do it because they don’t want the world to change them. People who one day will then discover that the world did change. Change for the better to leave behind a legacy of honor. It is to such people that I speak. And it is they who I wish will respond by raising their own voices for justice, ethics, integrity and compassion.
The people of ISIS will never be able to justify their actions by the Qur’an and Sunnah. This corrupt and malicious group will continue to appear and be cut off until the Dajjal himself will emerge from among them.
Abdullah ibn Amrtreported: Rasoolullahﷺ said: ‘There will emerge from the east some people from my nation who recite the Qur’an but it will not go beyond their throats. Every time a faction of them emerges it will be cut off. The Prophet repeated this and on the tenth time he said:
كُلَّمَا خَرَجَ مِنْهُمْ قَرْنٌ قُطِعَ حَتَّى يَخْرُجَ الدَّجَّالُ فِي بَقِيَّتِهِمْ
Every time a faction of them emerges it will be cut off until the Dajjal emerges from their remnants. Source: Musnad Ahmad 27767, Grade: Sahih
Rasoolullahﷺ  warned of the coming of a people like ISIS and described their rigidity, rudeness and lack of mercy as signs of their distance from Islam and its true teaching and understanding.
Ali ibn Abi Talib (R) narrated from Rasoolullahﷺ: When you see the black flags, remain where you are and do not move your hands or your feet. Thereafter there shall appear a feeble insignificant folk. Their hearts will be like fragments of iron (no mercy). They will have the state. They will fulfil neither covenant nor agreement. They will call to the truth, but they will not be people of the truth. Their names will be parental attributions, and their aliases will be derived from towns. Their hair will be free-flowing like that of women. This situation will remain until they differ among themselves. Thereafter, Allahﷻ will bring forth the Truth through whomever He wills.
Those involved in the ISIS, have, by their own actions, removed themselves from the fold of Islam. They have left Islam and those who join them will also be among them. Those Muslims who kill innocent people, Muslim or not, have committed murder. They are liable for capital punishment and if they die before they are punished in this world, then their destination is the Hellfire. This is the consensus decision of all the Muslim scholars of the world. I can give a list of Fatwas for anyone who is interested. We are thankful to our media for publishing them. Every leader of Muslims has condemned the ISIS and their actions. People join the ISIS do so for two reasons: to fulfill their own perverted fantasies or giving in to despair and hitting out those who they imagine are the reason for their frustration. Both reasons have nothing to do with Islam.
When crimes against humanity are committed, it is the duty of Muslims to stand with the oppressed whether they are Muslims or not. If such crimes are committed in the name of Islam, we have a further obligation to clarify for people the truth about our religion.
I live by the motto: I will not allow what is not in my control to prevent me from doing what is in my control. I invite you to do the same. Do what you can. For you will not be asked, “What happened?” You will be asked, “What did you do?” Do something worthwhile. For to live, is not merely to draw breath.
The best and easiest way to deal with political phenomena like the ISIS is to ask one simple question: WHO GAINS and WHO LOSES?
In this case the answer is staring us in the face: Who gains?
Weapons manufacturing countries and weapons dealers gain. Money launderers gain. Human trafficking gangs gain. Leaders with political agendas gain. And power hungry criminals gain.
They say that numbers don’t lie. So here are some numbers. Please take a look and tell me what you think we are really promoting. We get what we pay for; so here goes. 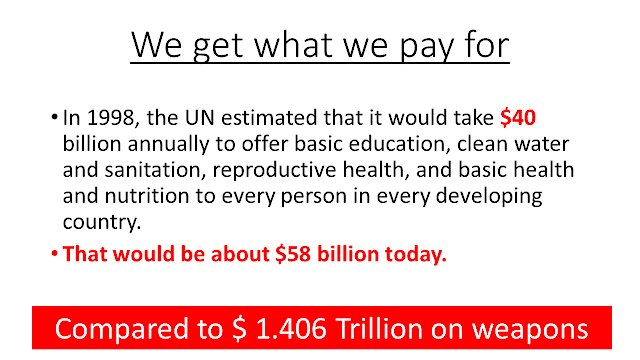 Action oriented advice and one that is very practical! Helping Imams understand the socio-economic and political context of todays environment and how this ties in with Prophet PBUH’s Seerah would help them create an awareness for their congregations and help them make Islam and the Sunnah relevant for the people practicing it. Imams also need to be the voice of reason and help counsel their congregation which will make the masjid a center of social activity for Muslim families. Outreach within the community combined with those done outside the community on what Muslims stand for will help improve Musllim’s standing… Read more »