Come to the Okavango

First there was the dry. Then it rained high up and far away in the mountains. And water flowed. Life giving water filled the river banks and overflowed. Life giving water which itself gives up its life in a few months when it sinks into the sands of the Kalahari Desert. But while it lasted, it would be called by a name that echoes in the halls of fame which list the most beautiful places on earth – the Okavango Delta. 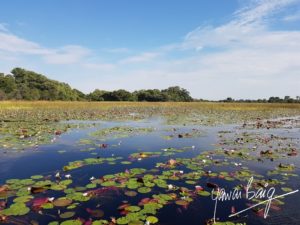 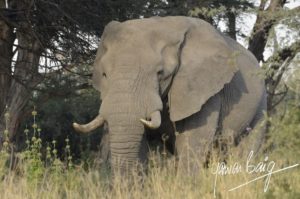 In Moremi, what we saw lots of were single male elephants. Some in Musth, with the telltale secretions from the glands behind the ear as well as discolored hindlegs thanks to their almost constant urinating in this period. An elephant in Musth is not someone you want to meet, up close. And we didn’t. But they were a magnificent sight with massive tusks. One had a couple of other males as companions; an old bull with two Askaris (guards). Another one was bathing and got disturbed when we turned up and flared his ears and shook his head to express his opinion. Another was busy digging for water in a waterhole that was damp but has no water in it. “But where are the herds?”, I asked the ranger. Further inside the reserve, was his guess. Lots of Mopani trees, favorite elephant food, on both sides of the cattle fence that I mentioned above. However, inside the fence they are all cropped short as if by a hedge cutter. While outside the fence they grow tall and shady. Evidence of the attention of elephants which eat all new growth and so the tree never grows tall where there are elephant herds feeding on them. You can see this in Kruger National Park also; hundreds of acres of neatly cropped Mopani. Wonderful creatures, elephants. My favorite among the Big Five. 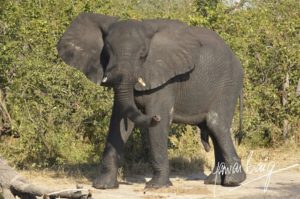 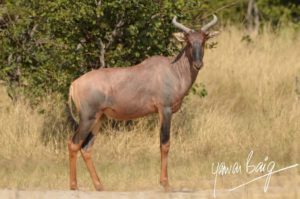 In Moremi we also saw the Tsessebe antelope, the fastest of all African antelopes, very rare in the Kruger but much more common here; a giraffe making faces at us and ostriches with their superior looks down the nose.
We stopped for a picnic lunch on the bank of a lake, under some sausage trees. These have a gourd fruit which is like a very long and fat sausage. The fruit is supposed to have legendary properties related to human reproduction which I am sure you can guess. If you can’t, then rejoice at the fact that you have a clean mind. The alleged properties are purely legendary and fictitious, so not to worry. What is more interesting about these trees is that it is from their trunks that the famous Mokoro (a dugout canoe) of the Okavango is made. 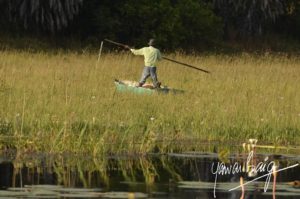 You must be brave and suicidal in equal measure to sit in a Mokoro in a place that is populated by hippos and monster crocs, but people do. Mokoro are the most common means of travel for local people and for tourists who go camping on the islands of the Okavango. Today, the government has prohibited the cutting of sausage trees to make canoes and so Mokoro are made of fiberglass. But you can still find plenty of authentic wooden Mokoro if you wish to take a ride. The boatman stands and poles it like the Shikara boatmen of Kashmir or the Gondolas of Venice, with the exception that in those places, you are not likely to meet a resident hippo with territorial tendencies or a sovereign citizen Nile Croc. Not an encounter to be wished for. 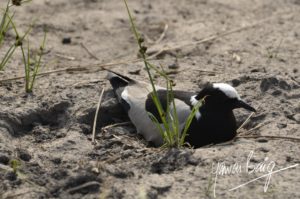 As we drove off, I spotted a Pied Lapwing; sitting on eggs in her nest and refused to move even when the wheels of the Land Cruiser were inches away. It simply sat still like a statue, which is its most common defense against predators. If that fails, then it will take off and pretend that one wing is broken and goes away from the nest, calling plaintively until it has succeeded in drawing the predator far away from the nest, before it flies away. Then it makes a series of dive attacks on the predator until it drives it away completely. It is amazing to see how this small bird with almost nothing to defend itself, makes up for that in spirit and courage. 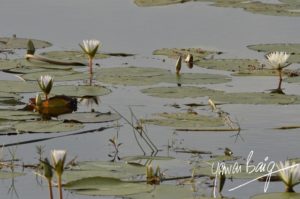 The next day we took an all-day boat ride, a flat-bottomed aluminum boat powered by an outboard motor, Happy at the wheel, and went up into the Okavango for over 150 kilometers. Imagine water so clean that you can see the bottom clearly 3-4 meters below, carpeted by multicolored lilies as far as the eye can see. Not a single plastic bag or piece of paper or cigarette to mar the landscape in hundreds of miles of wilderness. African Jacanas abound and wait until your boat is almost on them and then take off in low flight with their long stick-like legs and elongated web-less feet trailing behind. Imagine heaven or come to the Okavango. 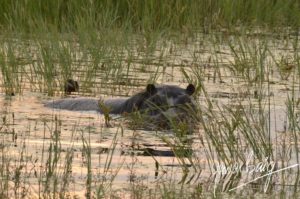 As you proceed, you will see the eyes and snout of a hippo bull staking out his territory. If you get too close, he will dive and can remain underwater for over half an hour. Usually he will surface a distance away and face you again. When you are in a motorboat this is an interesting sight. In a Mokoro, you don’t want to see it. For if he decides that you are a threat, he can submerge and surface under you and give you a very real chance at becoming a historical figure. Hippos kill more people annually in Africa than all other animals combined, so they are a real threat, not be scoffed at. 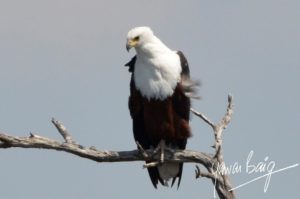 Lots of birds in the Okavango of which African Fish Eagles with their striking plumage, white head, neck and a bib on the chest, stand out miles away. If there is a tall tree, you can rest assured that you will find an African Fish Eagle on it, scanning all around for prey. The other very common bird is the African Jacana, busily walking on water – actually, running on its especially adapted feet on the lily pads which cover almost all open water in the Okavango. You will see all species of Kingfisher but the black and white, Pied Kingfisher seems to be the most common. 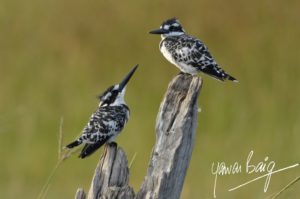 Then there are Egyptian geese, sunning themselves close to a huge crocodile. Plenty of Nile Crocodiles in this place, some of them real monsters. 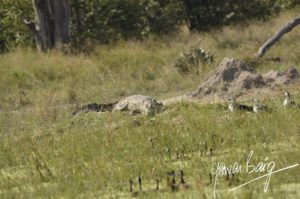 Imagine driving through a narrow channel through head-high reed-beds where you can’t see on either side anything except impenetrable reeds, waving in the breeze. The reed-beds give way once again to lily carpets interspersed with islands. These islands are mostly the result of birds depositing seeds on termite mounds. Here is a very interesting account of how these islands are formed.  http://www.itravelto.com/okavango-islands.html 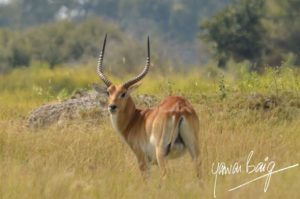 The islands are home to wildlife, Lechwee antelope, elephant, hippo, lions, leopard and in some places, cheetah. Warthog and other smaller game like jackals, hyena and occasionally wild dog also inhabit the islands. As the day progresses and the sun comes out, you are likely to see crocodiles sunning themselves on the edges of islands, always within reach of the water, to slide into at the slightest hint of danger. Although looking at some of the monsters, you can see that nothing except humans are any danger to them. These islands range in size from literally termite mounds to vast tracts of land, the biggest of them being Chief’s Island. This used to be the private hunting reserve of the tribal chief and is now a thriving tourist hub. You can fly in to Chief’s Island from Maun or drive there or take a boat.
Sitting in the bow of our boat, with the wind blowing through my fast disappearing hair, I couldn’t but think of the prospect of meeting another boat traveling in the opposite direction at the same speed. Quite likely and scary especially around the many bends. Even less happy is the thought of being in a Mokoro and meeting a boat like this come at you round a bend. The problem is that even if the boatman stops his boat, which happens quite easily because given the resistance of water, if he throttles down, the boat comes to a halt; the bow wave that it creates, doesn’t stop with the boat. A motorboat traveling fast, can create a wave big enough to completely swamp and sink a Mokoro. As I said, not a happy thought.
We stop at an island for lunch, only to discover that the hotel has packed us non-halal food. That is when we discover how little we really need to eat. One apple each and a small packet of chips, washed down with water. Happy is very unhappy with this development and the hotel’s failure and promises to take up the issue with them while proceeding to demolish our non-shariah compatible chicken et al.  All at our invitation of course. No point in wasting food, is there? 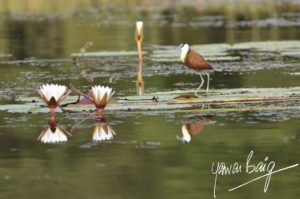 Sitting on the ‘beach’ of the island (which Happy said was about 10 sq km in size) watching the Okavango Delta before us, I could only marvel at the cycle of beginning and end that the delta represents. From the dry season when it is desert, to the wet, when it is a sea of water giving life to many. Then a few months later the water sinks into the sand once again to repeat the cycle once again. Our ‘lunch’ finished, we get back on board the boat once again to resume our journey back to the Thamalakane River Lodge. 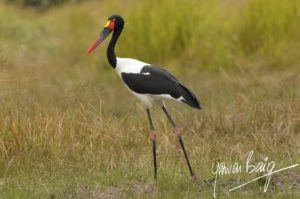 Water everywhere with lilies now preparing to shut shop for the night. The hippo’s grunting roar as we pass, a greeting or warning, as you may like to interpret it. A Saddle-billed stork, stalking his way back from the water’s edge. Lots of Letchwee antelopes, horned males with their harems. They used to be called Red Letchwee but I understand they have been renamed, Common Antelope, a development to which I am sure they would take exception if they knew. But it gives you an idea about their numbers. 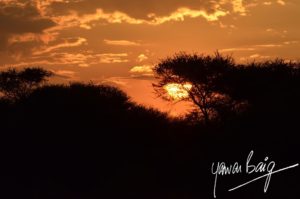 As we progress, the sun which has been traveling its course, finally extinguishes itself in the waters of the Delta, but not before giving us a final spectacular display of orange and red. A new display every day that changes minute by minute. Never to be repeated. Infinite variety to delight the senses and draw the mind to the Creator of it all.
The Okavango is a place to be visited again and again and never to be forgotten.
For all my photos of the Okavango and Moremi, please go to :
Okavango Delta – Botswana – https://goo.gl/photos/DDNkJNyxE6CqfyRW6
0 0 votes
Article Rating

Thank you for taking me through the pristine wilderness of Botswana. As usual an amazing article with the simply brilliant satire. I'm sure Happy will be very happy to see his name happily being associated with happiness.

Sheikh Yawar at his usual best; very informative and cute.
thank you