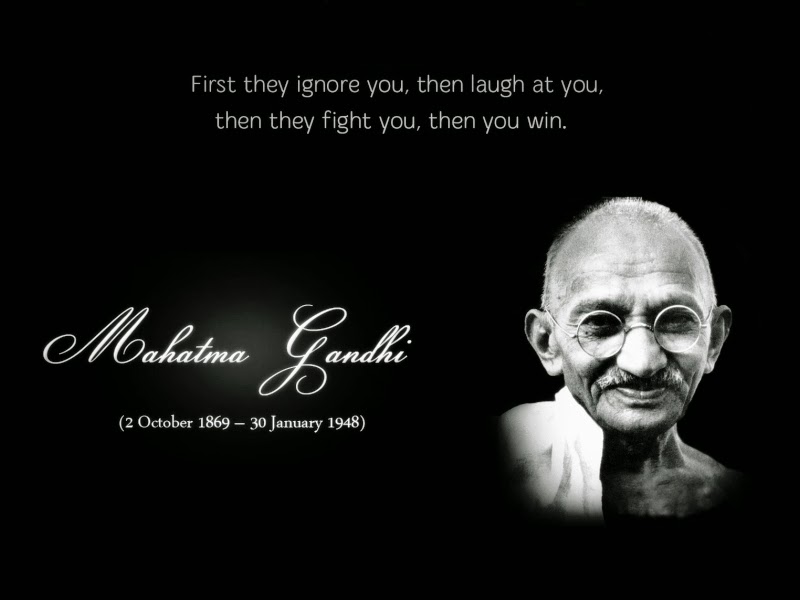 30thJanuary, 1948 – Nathuram Godse fired a bullet which ended a life that impacted millions of others and continues to do so 66 years later. Gandhiji was perhaps the only Father of the Nation to be killed by his own people. We all share the shame.
Easy to kill. Impossible to forget.
So what do we remember?
1.    The power of living your message which comes out of a passionate belief that you are on the right path that leads to eventual success no matter how foggy it may look.
2.    The power of perseverance in the face of apparently insurmountable odds – arising from the knowledge that the winner of the race is only decided at the end.
3.    The power of demonstrating your commitment by walking the talk because people listen with their eyes and don’t care what you say until they see what you do.
4.    The power of tackling strategic issues which may seem insignificant to begin with but drive the change you seek to create.
5.    The power of demonstrating that your method works because seeing is believing.
6.    The power of breaking the loop of violence and introducing Ahimsa to the world.
7.    The power of taking diverse people along with you and keeping them focused on the common goal despite their individual differences.
8.    The power of holding oneself accountable for results and not blaming others for failure.
9.    The power of remaining humble despite praise and adulation of millions.
10. The danger of indecisive action when someone tries to go off in a different direction because of his own vested interests.
11. The danger of not creating robust successors to carry on the message.
12. The danger of relinquishing leadership too early before the dust had settled.
The danger of being human.
The question for us is not why Gandhiji died but what he died for. The question for us is what we intend to do today if indeed we share his dream of a nation that runs on the four wheels of truth, justice, compassion and service.
Gandhian principles make even more sense today than they did in 1948. But all principles are only as good as their practice. Gandhiji demonstrated the courage to practice what he preached and history is witness to the results. He proved his point beyond doubt.
Gandhian political strategy and method have been analyzed and commented upon but what is often forgotten is the ethical and moral belief that underpinned it. Gandhiji’s success was built on love for his fellow human beings – not hatred. Hatred killed him – but failed to extinguish his memory or the power of what he demonstrated.
Whether the death of Gandhiji is to be mourned or not will be decided by what we decide to do with his dream – our dream – the dream of a united India. Will we support hatred or love? Will we support compassion for the weak or their oppression? Will we support truth and justice or lies and corruption packaged as patriotism? This is our time. And history will hold us accountable for it.
We salute a man who was not afraid to be a man. Yes he died. And no, he will never be forgotten.
(I don’t own the picture. I don’t know who owns it. I thank them for making it.)