When the voiceless get a voice

If there’s one overwhelming sign that numbers mean nothing and organization means everything, it is the plight of Dalits and Muslims in India. Dalits and Muslims are officially 17% and 13% of the population. That means that together one in three Indians is a ‘Dalim’ – Dalit Indian Muslim (my coinage today – in case it ever makes it to the Oxford Dictionary like Ayya and Ayyo have done). Yet these two are the most powerless and oppressed communities in the largest democracy in the world. That sounds like an oxymoron because in a democracy where one man may not have food, clothing or shelter, but he has one vote (and so does every woman); how can it be that the most populous segments of citizenry are the weakest? But so it is. Like snake charming and the Indian Rope Trick, this is also the essence of being Indian.
To know what the meaning (linguistic) of Dalit is, please see the website of the NCDHR http://bit.ly/2e5Kcso
Do notice the ticker tape at the top which gives you an idea of what being Dalit means in real life terms, not merely linguistic. But to understand what it means, there is only one way; be reborn as one. I believe that it is literally impossible to understand what it means to be Dalit (untouchable) unless you are born as one. I have had the privilege of living off and on with my Gond friend, Shivaiyya (his photo graces this article and I have written about that in my book, ‘It’s my Life’ (it’s on Amazon and Kindle). I would spend every waking hour with him all my summer and winter holidays which I spent with my dear mentor and friend Venkat Rama Reddy. Shivaiyya belongs to the Gond tribe (forest tribals are also Dalits) and was my hunting partner. He and I would walk about the forests of the Aravalli hills in search of game. In that process we would share food, time and stories. Especially on cold nights sitting by a small fire trying to keep warm and alive. When you are in that situation what you have a lot of, is time. 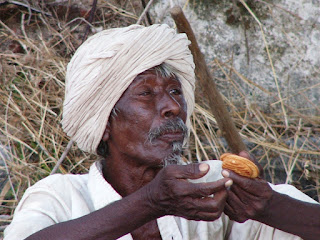 Many thanks Renuka for your comments. I do hope something positive results. Too much suffering in the world, which we can end if we want to.

An excellent post Yawar. You wrote "Let nobody blame Islam or its Prophetﷺ for what people do in its name." Sometimes interpretations can be fatal. Which is why offering the correct interpretation to the world is the best service to humanity yet. You tirelessly do so. I salute you for that.The Varna system also happened pretty much by chance and probably due to a folly of interpretation. The word 'caste' came into mention by the Portuguese in the 16th century. Before that, in the tenth mandala of the RigVeda, the Purusha Suktam, a poem depicting the various occupations done by… Read more »

Many thanks indeed Suresh. To close the loop, I made arrangements for Shivaiyya to be operated. Didn't add all that in the article. As for Masjids, indeed we are also doing that as well as and more importantly, making sure that there is no discrimination in allowing Dalits and Dalit Muslims into any Masjid. After all Allahﷻ didn't create the discrimination and so there is nothing in Islam to prevent Dalit Muslims (Dalims) from entering Masjids. Anyone who prevents them is going directly against Islam.

Dear Yawar,I love this article. As a dalit I can resonate in many ways with you what you said in this post. Just want to share a couple of things, which came to my mind while reading. Dalim: Dalit movement has strengthened certain political identities like Dalit Muslims, Dalit Christians and Dalit Hindus. The first two identities were owned and asserted by the poets, writers, activists and NGOs, who has the background of Islam and Christian religions. Dalit Hindus wanted to mask the ‘Dalit’ and pretend as ‘Pure Hindus’ because of many reasons. Your coinage of “Dalim” brings new dimension… Read more »

I agree. Let someone with money contact me and I will tell them what they need to do to make the above happen. There is an excellent model for the schools in the Mittal Schools in Punjab and Haryana. The Director of the project Col. Vijay Chadda is a dear friend and has done such a sterling job that he (and the project) were awarded the annual prize of the Qatar Foundation. So it can be done. All that remains is the will.

The analysis of the problem is on the dot as is the infrastructure that will work to change the status quo. What is needed is the step wise "how" of it. With a flow chart a light is comprehended. Without, one remains in the realm of wish. Money and commitment must converge…