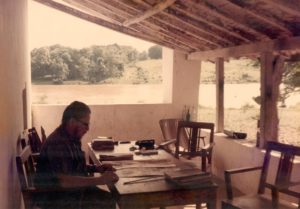 Uncle Rama at his desk – River Kadam in full flow
Time, late 60’s to middle 70’s. I used to spend all my school vacations and later, whatever time I had free from college with Uncle Rama in Sethpalli. Sethpalli is a small village about two kilometers from the bank of the Kadam River, with agricultural fields between the village and the river. Uncle Rama’s farmhouse was on the bank of the river itself, with his farmland behind and to the sides of it. The farmhouse consisted of a long veranda with a waist high wall, that ran the length of the front of the house, facing the river. The veranda had one door leading into the house, which opened into the central of three rooms. The middle room which you entered from the veranda was a passage cum dining room with one bedroom on either side. Both bedrooms had windows opening into the veranda as well as to the side of the house. The dining room had no windows, just the door leading into it from the veranda and another leading out into a veranda at the back of the house. As you entered this back veranda from the dining room, to your left was the kitchen, the domain of Kishtaiah the cook and opposite it, on the other end of the veranda, the bathroom. That literally meant what it was called, a room to have a bath in. It had a stone floor sloping gently to a drain in one corner. Water came in two buckets, one cold and one hot and you mixed it to the temperature you wanted. 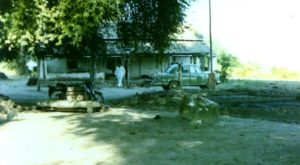 If you sat on the veranda, which was the living room of the house, you looked out over a waist high wall which was also a seating arrangement, out to the river. Between you and the river were three massive tamarind trees, easily over fifty years old, perhaps more. They grew within touching distance of each other so that their branches held hands high in the air. The result was the densest shade you could imagine. There is something about the shade of tamarind trees that is cooler than the shade of any other tree. Maybe it is my imagination but I recall the countless afternoons that I spent lying on a charpoy in that shade, gazing up at the canopy of tiny compound leaves, marveling at the multiple shapes and shades of green. A few yards beyond the trees, the land sloped steeply into the bed of the Kadam River. The channel itself meandered from one bank of the river bed to the other depending on where it had been flowing most vigorously in the monsoon. In the summer, the channel was a trickle which you­­­­ could cross literally by jumping over its narrowest part. But in the monsoon the Kadam flowed strong and deep from one bank to the other. I never measured the actual width of the river at the farm but I think it was probably about half a kilometer in width.
My almost invariable daily routine was to take off into the forest after breakfast, with Shivaiyya as my companion and return only after dark. Shivaiyya was one of the people who worked on Uncle Rama’s farm and like most of them had no fixed duties. He was there to do whatever needed to be done which during my visits was simply to be with me. He was older and far wiser and his job was to see that I didn’t do anything stupid while we were in the forest. He was a great friend and we shared our food and an occasional beedi, especially on a very cold night when we would sit up at a Sambar rolling spot, waiting for Sambar to come down from the hills. Naturally this would be only towards early morning after any Sambar had been and gone, because a beedi is the surest way to warn off any animal.
I would either not eat lunch at all or take a roti or two in a small metal tiffin box with some mango or lime pickle to eat for lunch, which Shivaiyya and I would share. But most often we just drank water from the deep pools in the river, left over from the flow that dries up in the summer. If you spread your handkerchief on the surface of the water and suck through the cloth, you manage to get some clean water to drink. This method will not save you from chemical pollution, but mercifully those were the days before we destroyed our rivers. Then we would sleep in the heaviest shade that we could find, which was not easy in the summer because the forest (and teak plantations) are deciduous and have hardly any leaves. But if you went to a bend in the river which still retained some moisture, you would get some trees with leaves and welcome shade. Sleeping in a forest with tigers and leopards was not without its hazards, but the tiger is not as opportunistic as the African Lion and so you are quite safe in these forests. I am living proof that tigers don’t eat junk food and recall with great pleasure the many times that I have slept the deepest, most peaceful and comfortable sleep of my life in a sandy stream bed or in the shade of a forest giant. 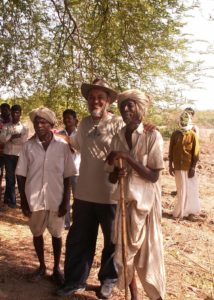 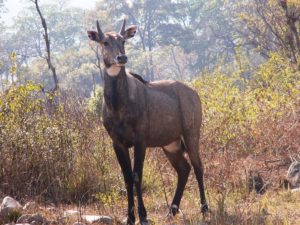