And proclaim the Grace of your Rabb

وَأَمَّا بِنِعْمَةِ رَبِّكَ فَحَدِّثْ
Duha: 93: 11. And proclaim the Grace of your Rabb
Yesterday we (in Hyderabad, India) had a massive storm with a 100 mph gale and heavy rain. 67 electric transformers burst all over the city. Trees were uprooted and fell across streets, blocking them and causing massive traffic jams. A huge unipole crashed and smashed three cars. We had no power for 12 hours and it is a herculean task that the electricity department did with great success in restoring it despite the damage and destruction to transformers, power lines and poles. 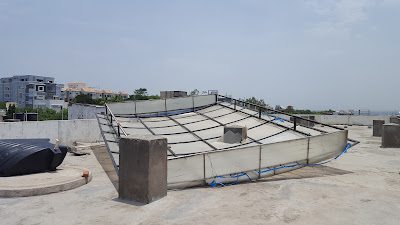 Where I live, we have a courtyard which has (had) a perspex canopy, bolted onto a steel frame, grouted into the concrete of the courtyard terrace. The wind ripped it off its moorings and deposited it at the other end of the terrace. Mercifully it crashed against a concrete pillar and stayed on our terrace.  Here is what it looks like now.
Near where the canopy fell is (was) a 5000 litre water tank which was filled to capacity at the time of the storm. That means it weighed 5 metric tonnes. This is what it looks like after the gale caught it: 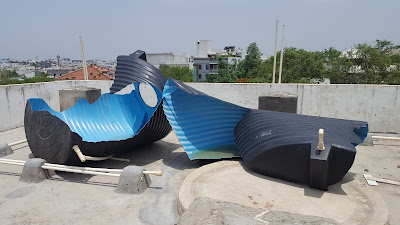 In our flat, two floors below this we have an open balcony on one side. In the center of it is a Frangipani tree which is really two trees in one big brass pot, which I have been nursing for 6 years trying to get it to flower. But nothing happened until I was about to go to South Africa in April when it started showing some signs of life. Until then it had literally 10-12 leaves and not a single flower. When I returned in May, it was lush with leaves and bunches of white and red flowers. I was delighted that all the effort had finally paid off and we had this lovely tree on the balcony. Here is the photo I took after I returned. 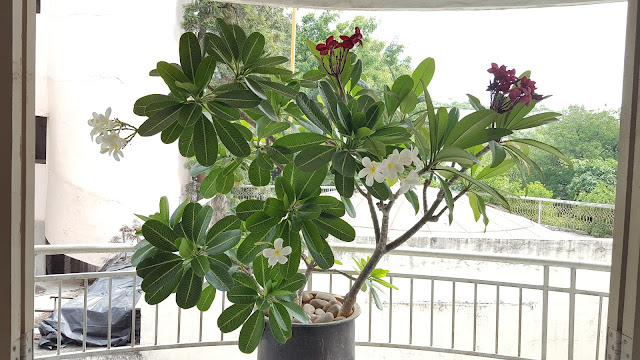 Also on the same balcony we had some unwanted guests – a Feral pigeon mother with her two little chicks. Unwanted because pigeons are a menace in Hyderabad, aggressive, messy as hell and noisy and belligerent to boot. But being urbanized as they are, they take advantage of our absence and build their nest in our balcony and procreate. So when we returned we were greeted with the messiest of nests – just a few dry leaves strewn around – and the ugliest of babies you can imagine – pigeon chicks. Pigeons are the world’s worst nest builders. A pigeon nest is a joke if it is on someone else’s balcony and a never ending aggravation if it is on yours. The mess of dry leaves surrounded by pigeon poop is disgusting to put it politely. But this one had these two chicks in it, so much as I was tempted to chuck the whole lot into the garbage, I resisted and they were with us last night.
Then the gale hit us. As you can see, it ripped out a steel frame grouted into concrete and tore apart a water tank as if it were made of paper.
My first thought was, ‘There goes my Frangipani and the lovely flowers. And goodbye little pigeon chicks.’ I was sure that there was no way that they could survive the gale and rain. They would be blown away, washed away or simply die of fright with the explosive thunder and lightning that turned night into day. There was nothing the pigeon mother could do except to save herself and so she slid into a gap between our folding balcony doors sandwiched between the glass and mosquito mesh. There she must have prayed to her Rabb for the safety of her brood. I could do nothing for her or her brood. I dared not go near where she was for fear that she would try to fly away in that gale which would surely have killed her. And I dared not open the balcony door to go onto the balcony to try to protect the chicks because the house would have filled with water. As it was, the balcony was like a lake, flooded with water.
The gale and rain eventually ended and when I could go out I went out and what did I see?
Here is what the pigeon chicks and their nest looked like: Everything dry. Not even a dry leaf blown away. Chicks safe and sound and that corner of the balcony dry, while everything else was flooded. 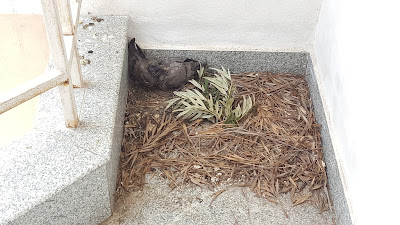 As for the tree, well, I will let the pictures speak for themselves. I have posted the picture of the tree I took on May 5 when I returned from South Africa.
Here is what it looked like today after the storm: 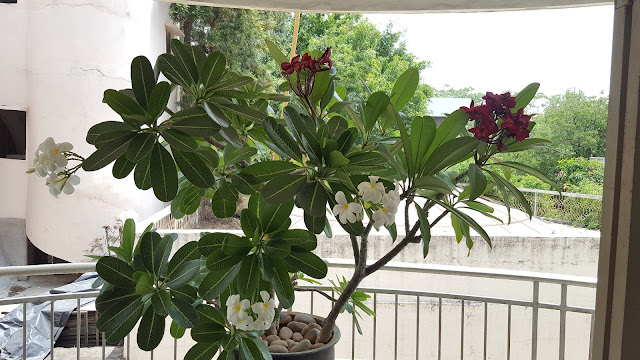 You will notice that the lower bunch has more flowers in this photo than in the earlier one above as this was taken today, May 21, after the storm while the one above was taken on May 5 as I mentioned. Nothing happened to the tree or flowers.
Tawakkul is to still trust in Allahﷻ and that He can protect you when everything around you says the opposite. That is what I believe the pigeon mother did. And it is the result of her dua that her chicks and my tree were both safe.
I am sharing this to share my joy and sense of wonder at what I saw yesterday. Steel, hard moulded plastic grouted in concrete ripped away. Dry leaves, little chicks and flowers, intact.
وَمَا تَشَاؤُونَ إِلَّا أَن يَشَاء اللَّهُ إِنَّ اللَّهَ كَانَ عَلِيمًا حَكِيمًا
Insaan 76: 30. But you cannot will, unless Allah wills. Verily, Allah is Ever All-Knowing, All-Wise.
0 0 votes
Article Rating

SubhanAllah. Jazakallah for your story on Tawakkal Allah. This reminded me instantly of the aaya from Surah Rahman – Fabiayyi Ala e Rabbi kuma tukazzibaan.

Allahu Akbar!
Such an important lesson to learn from, Jazakallahu khairan Shaykh for sharing this with all of us.

Subhan Allah. Such an amazing story.

Asak,
Subhan Allah ……worth sharing this Eye-opener in these months of mercy.
May Allah forgive us and keep us in the shadow of his mercy and peace.. Aamin

Thank you, Sir for sharing your amazing thoughts and reminding us (especially to me), for all the blessings. Perfect example of reflecting on the incidences happening around us.
Jazak Allah Kharian

This is an amazing eye-opener for us to ponder on the might and mercy of Allah, happening all the time in front of us but we over-look. JazakAllahu khayran Shaykh for putting it together beautifully. Enjoyed reading.

And all this devastation in the mid summer!