Of game drives and choices

He was the king of the forest (or so he thought about himself). He stood over five feet tall at the shoulder, weighed over one thousand pounds, with a massive neck supporting a rack of magnificent antlers rising high above that. The antlers were very impressive to look at and very useful in battle when he had to defend his harem against uppity youngsters, trying their strength against him. They could however be a fatal liability in thick bush as they could get caught in it and become the cause of his demise, if had to make a quick dash to save himself from his only predator, the tiger. So, he had learnt to stay in relatively open areas of rocky slopes, dotted with trees and some bush. He knew how to stand or sit with his outline broken so that to the casual observer he became a part of the landscape, his body color merging with the earth and his antlers simply dead branches. Especially when he was aware of being watched but not yet alarmed to make a dash for it, he knew how to be so still that even a second look wouldn’t reveal him to the observer. What he had no control over was his ears. They had to keep moving to scan for sounds, which may spell danger from a direction he was not looking at. And they were what gave away his location to the observer who had patience. https://en.wikipedia.org/wiki/Sambar_deer
On this day, he had had good browsing all night and then just before dawn he had gone to his favorite rolling spot; a wide pool full of slush. His kind rolled in it until they were covered in liquid mud which later dried to form a coat impermeable to flies and biting insects which were the bane of his life. A good roll ensured that he would be able to rest up during the day peacefully. Sambar are active at and after dusk into the night and so spend most of the day, resting in shady spots. The only danger with rolling was that tigers also knew about this luxury of Sambars. So, rolling spots were a favorite ambush spot for the tiger. For the tiger, a Sambar rolling in the mud is almost a sure meal because it is impossible for the Sambar to rise from a prone position on his back and side and run before the tiger closes on him. So, Sambar are extremely cautious when they go to roll and spend far more time casing the joint, than in actually rolling. The roll is really a quick one, very like a horse rolling in the dust (for the same reason) and then he is up, all senses in high alert, trying to see if he can do another roll or must run for it.
For an animal this big, Sambar are extremely agile and gallop up and down steep rocky slopes as if they were flying. Having ridden horses, cross country I can vouch for it that there is no horse or horseman in the world which can chase a Sambar either up or down a slope without breaking a leg of the horse and killing himself. But Sambar do it all the time. As a matter of fact, their favorite escape tactic is to race downhill at full gallop, which even tigers can’t match them at. All this of course if they are alert to danger and get as much of a head start as possible. Awareness is their best defence and their best guarantee of survival. This stag had reached his prime because he had mastered the art of being alert. There were deep claw marks on his withers to show the only encounter with a tiger; a young male whose ambition exceeded his ability. But still his claws drew lines in the Sambar stag’s hide that healed but remained as a reminder to him of the importance of being on his guard all the time. 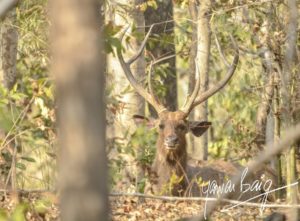 Wow! I got exhilarated as I followed you into the forest on the banks of the river Kadam.
جزاك الله خيرا for sharing. It is unfortunately something that my generation did not have the benefit of experiencing.