He had killed the buffalo late the previous night. The dark was his friend. Thanks to the reflectors in his eyes, he could see as clearly in starlight as we can see in bright daylight. If he could have read a book, he would have, reclining on a massive tree branch overhanging a pathway. As the light faded and night set in, he was on his favorite perch, only his tail hanging over the side, announcing his location. He had climbed the tree earlier in the evening to give the Langur sentinels and their friends, the Axis (Cheetal) deer to sound their alarm calls and eventually tire of it when they couldn’t see him any longer in the gathering darkness. The sun goes down rapidly in the tropics and Yala National Park, where he lives is in the far south of Sri Lanka. He is a leopard (Panthera Pardus kotiya). A big male, full grown and at the peak of his powers. The Sri Lankan Leopard is a subspecies native to Sri Lanka that was first described in 1956 by the Sri Lankan zoologist Deraniyagala. In 2008, the Sri Lankan Leopard was listed as Endangered on the IUCN Red List.

But he didn’t know all this. All he knew is that he was the top predator in the forest and, so he could roam where he wished and take whatever suited his fancy, at will. There are no larger predators in Sri Lanka unlike India and Africa where leopards live in fear of tigers and lions. In Yala and other national parks of Sri Lanka, the leopard is king, and this shows in their behavior. Yala is the only place where I have seen leopards stalking along a road in broad daylight. And wonder of wonders, I saw a full grown young male lying under a bush, with several jeeps full of tourists ogling at him from just a few feet away. He made no sign of leaving nor did he show even the slightest nervousness. The only cat which does that in India is the tiger and in Africa, the lion. Though the African leopard (Panthera Pardus Pardus) is a larger animal, it is very secretive and almost totally nocturnal. He is far too fearful of lions and rightly so. So also, the Indian leopard (Panthera pardus fusca), is wary of the tiger which would kill it if it could.

Sri Lankan leopards grow bigger than their Indian cousins because of their top predator status and because there is abundant game in Yala. Not only are there huge herds of Axis deer (Cheetal) but feral water buffalo and wild boar. In addition, it appears that villagers are permitted to graze their buffalos in Yala and I saw a great many of them as well, quite at peace with those that appeared to be wild. I think this is a very bad idea as invariably this invites man-animal conflict and the loser is always the animal. In this case, the already endangered leopard.

To return to our story he made his kill as the buffalo, a fully grown but young female was returning to her herd. As she passed under his tree, he landed on her back and bit into the back of her neck, severing her spine. The buffalo bellowed in pain and fear, took a few lurching steps forward trying to dislodge him from her back but in vain. By then the massive jaws with their powerful bite did their work and the canines sank through skin and gristle and severed the spine. The buffalo collapsed in its tracks and the leopard, lithely leaped off and immediately grabbed her throat in the classic killing stance of the leopard, cutting off air and possibly severing the carotids. In this case, this was not necessary as the buffalo’s spine had been severed and so it was going nowhere. It is interesting to speculate on the killing technique which is like that of the tiger when it tackles Gaur; the massive wild ox of India. Tigers also leap on to the backs of Gaur, preferring younger bulls or cows and bite into the back of the neck to sever the spine. That way they incapacitate an animal that is otherwise more than able to kill the tiger, being far heavier and having a pair of lethal horns. 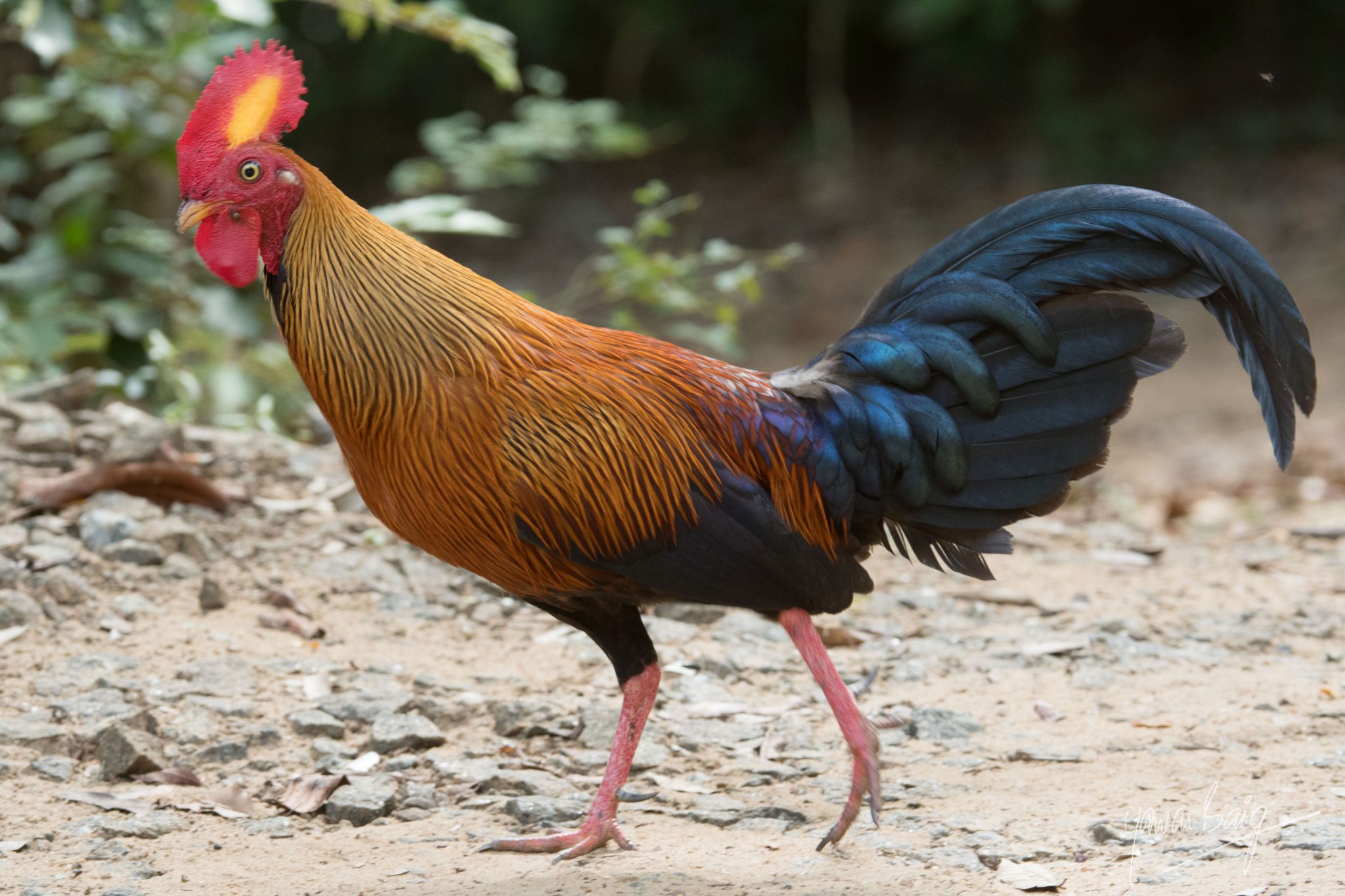 After killing his prey, the leopard fed on it until he was full and then dragged it behind a large Lantana bush to hide it from Jackals. There are no vultures in Sri Lanka. Neither are there any Hyena or Wolves. So, Jackals are the only ones likely to try to steal a bit of meat from the kills. Other leopards are a threat but in this case, he was so massive and powerful that he didn’t really expect another of his species to take any chances with him. Leaving the kill behind the bush, he climbed an old Banyan (Ficus Religiosa) nearby and stretched out on his favorite branch to sleep off his meal. Early the next morning, just as the sun was starting to show on the horizon and the Sri Lankan Jungle Fowl with its splash of bright yellow on its comb, started calling, to be answered by the Peafowl roosting on the topmost branch of a dead tree with its feet in the flood waters of the river, he walked down the trunk and leaped down the last few feet to return to his kill to take some more mouthfuls of the, by now, reeking meat.

As he was tugging at an especially tasty bit, we drove up on the jungle road going past his cache. I saw the leg of the buffalo move which meant that the killer was on his kill. We stopped and waited but there was no sign of him. Then my friend Ifham Raji, a wonderful professional photographer from Colombo, who very kindly accompanied us and gave me lessons in the field, decided to call. He can imitate the call of a female leopard calling its young. Until that moment, we didn’t know what would come out. All we knew was that there was a leopard kill and we had come to see if we could get a look at the one who made the kill, if possible. 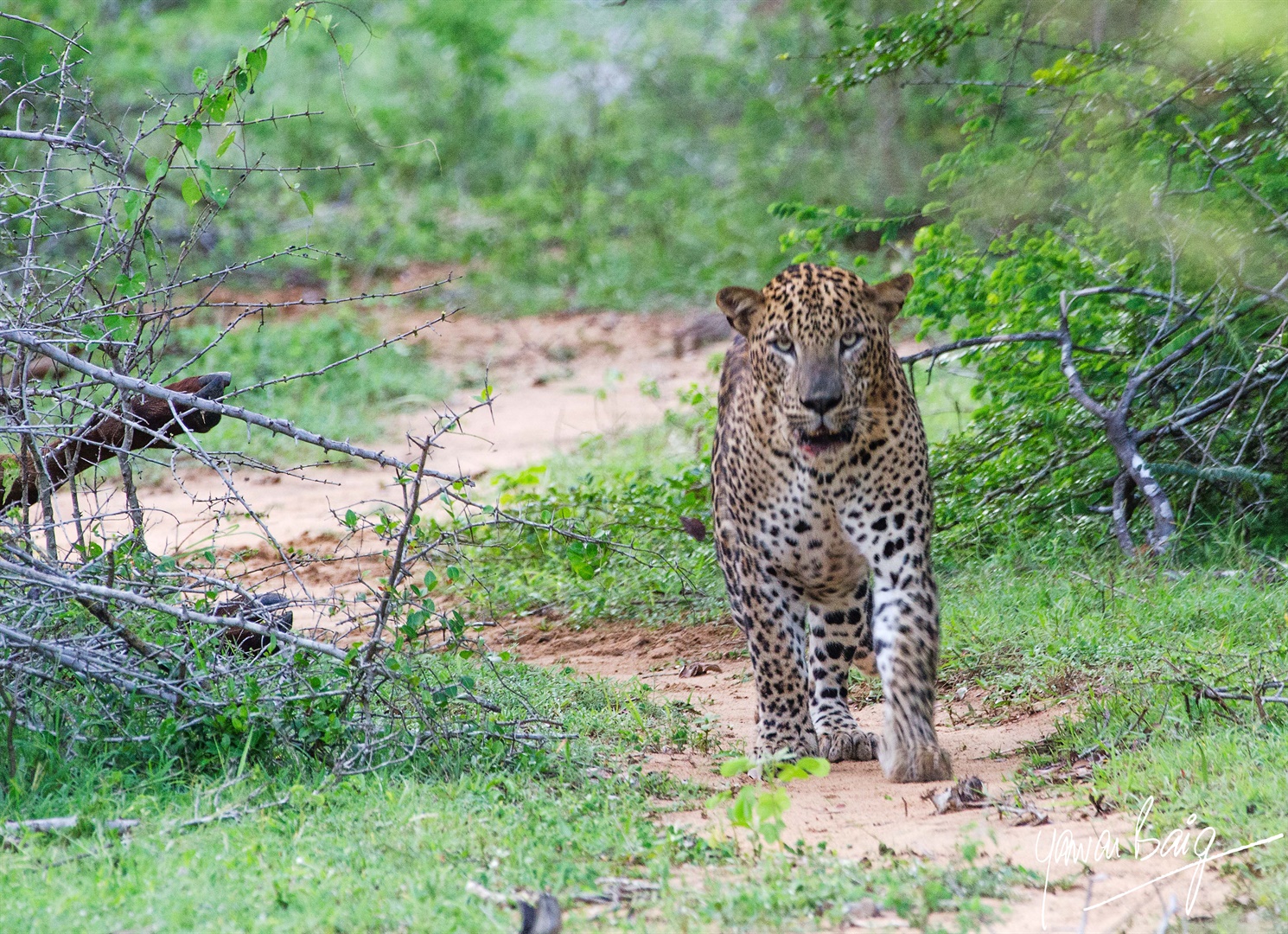 As soon as Ifham called, a guttural, woof; he came out from behind the bush in one short rush. He stood there looking for his mother whose voice he had heard. Then he walked towards our jeep and about twenty meters from us, he turned to his right and walked a few steps and lay down. Then he rolled over, as if he was playing, his tail high in the air. He sat up and looked at us directly. Then he decided he didn’t like being fooled and walked away. That was the last we saw of him and though he must have returned to the kill later, we never saw him again. The sight of his massive head and shoulders, his fluid majestic walk, his stand looking at us in total confidence and then his playful rolls on the ground as he would have done as a cub, playing with his mother and siblings, etched into my memory. Was he remembering his own childhood? Did the call remind him of his childhood? Who knows? 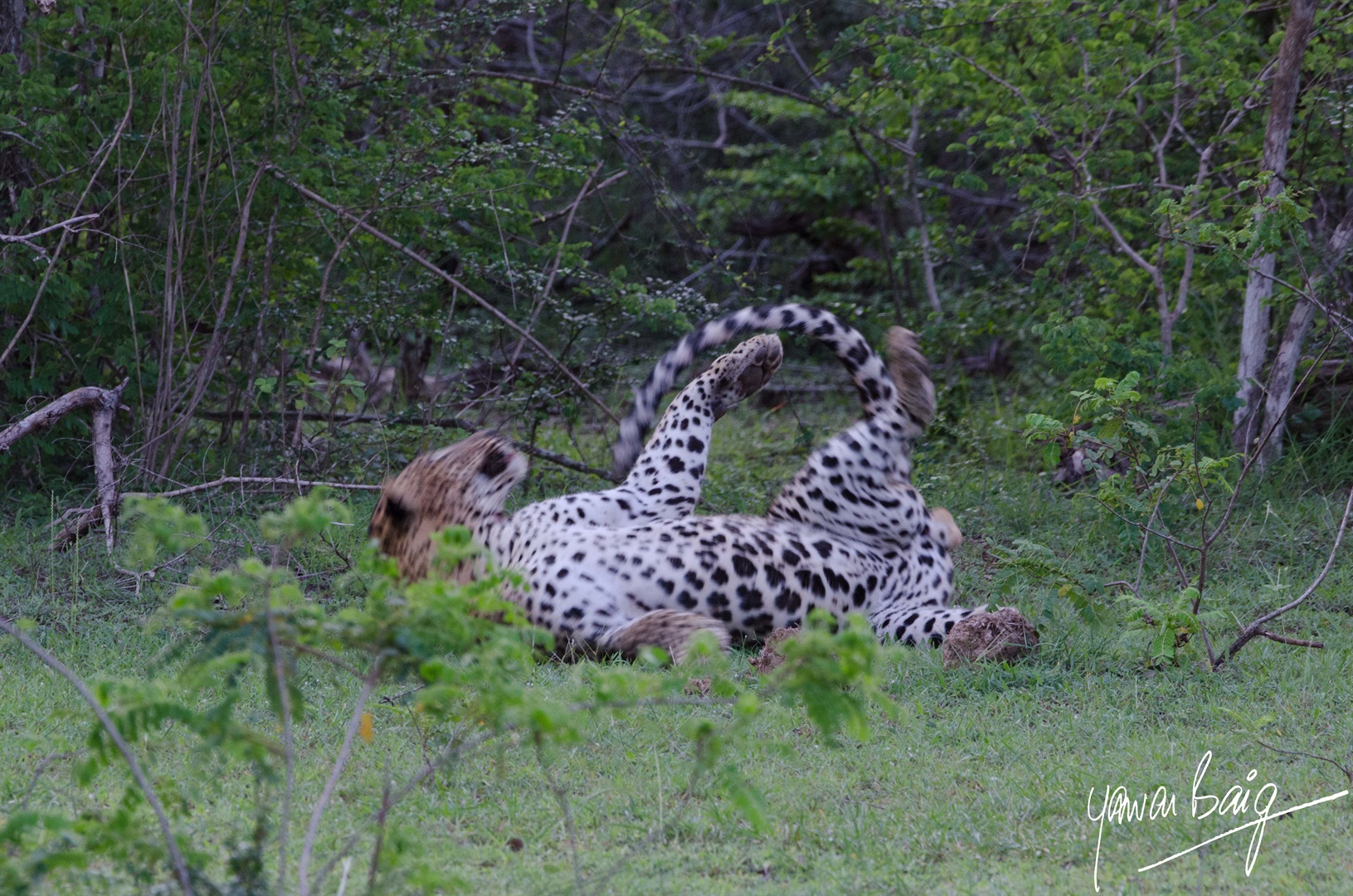 All I know is that I got some amazing photos and lived through an experience that can have no parallel. This is the gift of the wild places, which one can only experience. Indeed, I can write about them and you can read what I write and see the pictures. But I can’t for the life of me, express the excitement of the moment when for me time stood still; I stopped breathing until I had to gasp for breath as if rising out of the depth of the sea to the surface and forgot all about Aperture and ISO while taking my photos. But as a person learning photography, I can tell you that I would rather spoil a thousand photographs, than lose the excitement of the moment when you first see a big cat. The leopard is my favorite but don’t tell the tigers that. They are elusive enough when I try to find them. 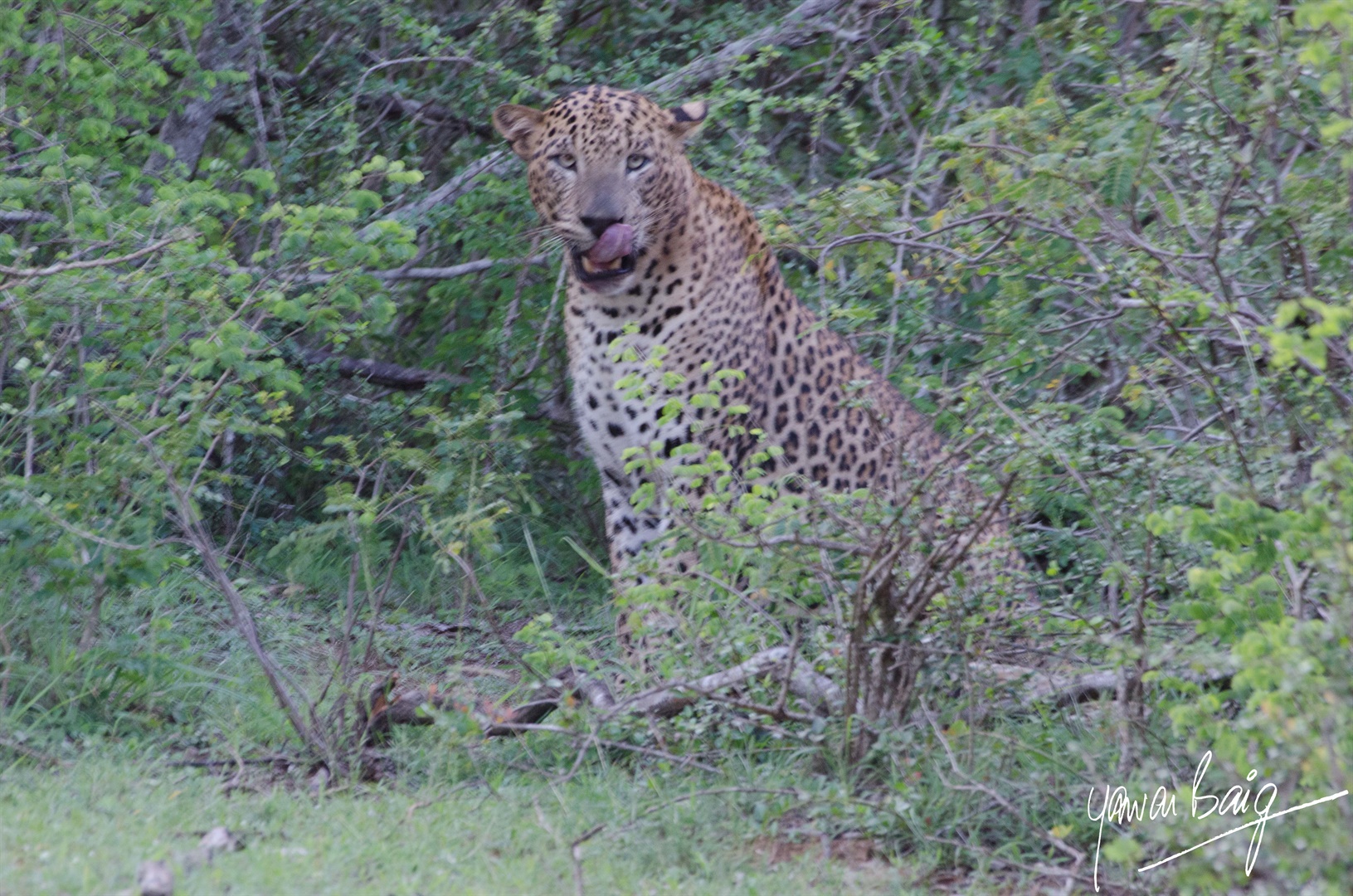 What a lively write up; it seemed I saw everything with my own eyes!

Wow,nice reading , it was like I was traveling with you, but I would inshallah will travel to Sri Lanka,i would like to see leopard in the wild,its my favourite and a very beauty full animal.very well written as usual Yawar bhai

Wow, what a day to remember. First I thought the buffalo had come a live, moment I saw it’s leg move through the twigs of the Bush and then suddenly when the leopard appeared and the stare it gave i will surely remember it for a life time.

Did not know that there were any large cats in Sri Lanka. Reading Yawar’s articles teaches me something every time! Keep up the good work. John